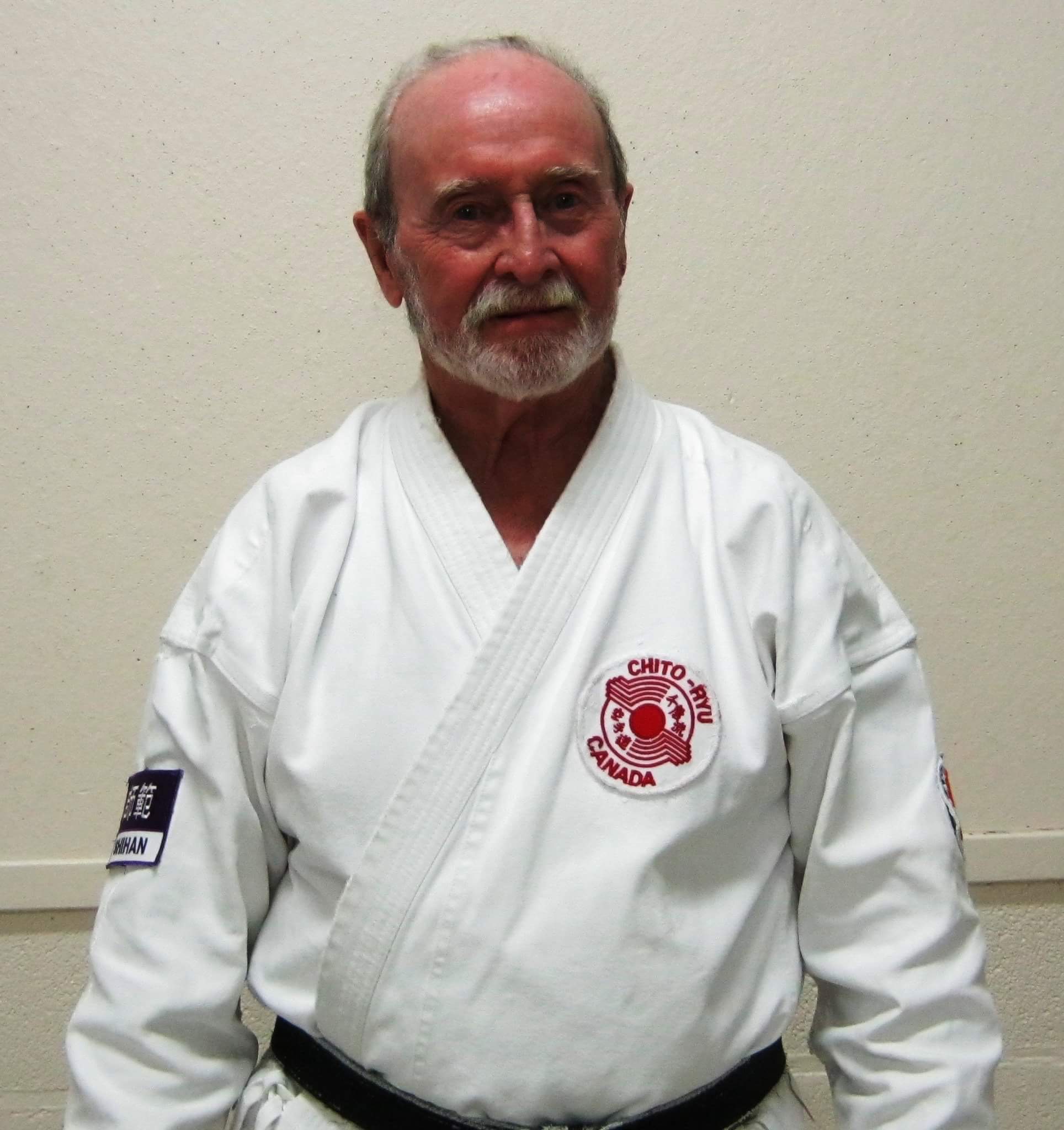 Sad News on the passing of Frank Mayo, Yondan Shihan – A Member of the Atlantic Karate Club & One of the Original Instructors at the East Hants Karate Club.
Our thoughts and prayers are with his family and friends

My recollection of Frank began at karate class in the spring of 1974 as Frank mentioned to me that I was a green belt at the time when he joined. We were training at the upstairs level of the Industrial Building, Halifax Forum Complex. I remember a man who walked in the door, who was already older, a man in his 40’s, began to practise with the rest of us.

He was quiet, well-mannered and worked for a drafting firm at the time, as so did many of the senior karate practitioners at the Atlantic Karate Club. The membership was high, about 300 members plus. They came from various walks of life and many were either students of the technical Institute, students of architecture, drafts persons, high school, university and college students, and a few government employees.

Frank had a hidden talent. He liked to fight. You couldn’t tell by looking at him. He never backed down. When Frank hit, he gave it his all. Those on the receiving end usually grumbled with words like “that guy hits hard, watch out for his punch”.

Many times I would go the karate club on a Sunday evening and the only other person on the floor was Frank. There he was working out by himself, so when I came along the night became an eventful evening. Before we knew it, it was midnight.

Karate was a true passion for Frank. We would spend many hours talking and working out the technicalities of how we thought it was all suppose to work. It was fun and exciting and at the same time we discovered a lot about the martial art and about ourselves. Frank and I often practised together on the off nights, honing our skills and exchanging ideas.

In the 1970’s, Frank was part of the movement that established the Nova Scotia Karate Association. (Today known as Karate Nova Scotia). This organization brought together karate clubs as well as styles from around the province.

In 1976 a new club was in the making. Kathy Moser, Frank, I and a small group of Black Belts from the Atlantic Karate Club were instrumental in providing instruction to its members. The Club would later become known as The East Hants Karate Club in Nine Mile River. (Today Headquarters for Chito-Ryu in Nova Scotia).

In the summer of 1980 Frank, Kathy, Paul, Robert and I, went door to door delivering flyers to the residents of Bedford. By September 1980, Frank had opened the Bedford Karate Club. The club lasted for about a year as membership eventually faded. This was a first for the Bedford area and martial arts.

Frank’s greatest personal achievements reflect his dedication to his practise and the Chito-Ryu martial art community. In October 2002 Frank tested and successfully passed his examination for Yondan (4th degree Black Belt) under the watchful eyes of the Son of the Okinawan Karate master, Tsuyoshi Chitose (same name). This achievement marks the stepping stone into the higher levels. His passion for martial arts extended to include the practise and teaching of Ryukyu Kobujutsu (Weapons).

Frank’s dedication and perseverance lead Frank to move forward to November 2015 where a national examination under the supervision of Sensei Shane Higashi and the Grading Technical Committee was held in Toronto for senior students. Mr. Frank Mayo was the honoured recipient of achieving the title of Shihan. Frank had reached his goal. A goal set so far in the future for a man that had walked through the doors of the Industrial Building so many years ago.

We were all very proud of Frank. Frank at age 81 won the hearts and minds of those in attendance at the Toronto examination and the special training sessions put on by our National Coach Sensei Germain Bisson, Kyoshi, Shichidan (7th Degree Black Belt). The air was electrifying and joy filled the room of well wishers and onlookers alike. It was Franks “Day” so to speak. Not a dry eye in the house when the announcement was made that Mr. Frank Mayo achieved the title of “Master”.

Everyone was so caring, looking after Frank’s needs every step of the way. Walking across a busy Toronto Street to a hamburger shop. People offered their help to ensure Frank made it across the road safe, offering him a ride in the car, others would turn their vehicles around to see if Frank needed a ride back to the hotel or to the karate club. At every turn there was always someone by his side. And it was my pleasure to have Frank by my side, as Shihan Advisor for the Nova Scotia Chito-Ryu Association Technical Committee.

It is with sadness that we have lost such a great man and human being. The Chito-Ryu community extends its heart to Frank’s family and friends. He will be missed. Frank will always be remembered.
Chris Golz