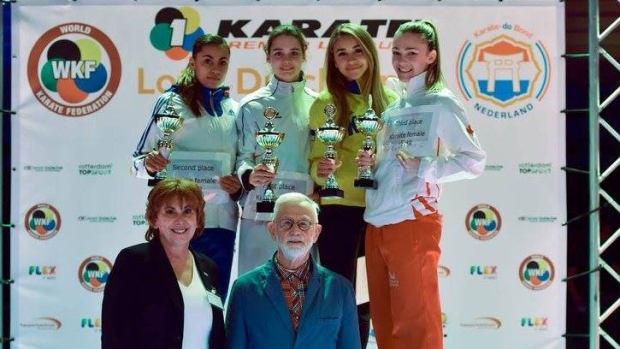 Fredericton karate star Kate Campbell has added another medal to her collection. Campbell won a bronze at the Dutch Open Karate 1 Championship in Rotterdam, Netherlands.

The tournament saw nearly 800 competitors, and around 50 in her category.

The only match she lost was in the semi-finals. She was defeated by France’s Emilie Thouy by one point, a woman she beat late last year. She then went on to win the bronze medal.

Kate Campbell, left, celebrates with her coach after earning bronze at the Dutch Open Karate 1 Championships in Rotterdam. (Submitted by Kate Campbell)

“I feel that I listened to my coach appropriately so I think that’s why I took home the bronze.”

Campbell is coming off a silver medal at the Pan Am Games in Toronto. She says that win has given her confidence going forward.

“There is kind of an expectation I think that I’ll do well at other events that I go to,” she said.

“But I think I battled a lot of mental barriers at that particular tournament and came out successful.”.

She says one of those mental barriers was the fact that she comes from a small province.

Kate Campbell of Fredericton won a silver medal in karate at the Pan Am Games. (CBC)

“I’m going up against these big names from these big countries and these big provinces even,” said Campbell.

“So I think my ability to just get past that and focus on my job at hand was a huge barrier that I was able to surmount at the games.”

Before the tournament Campbell was approved for the athlete assistance program. That means she will get funding from the federal government to train and compete for her country.

“It’s more funding relief for these big international tournaments that are clearly not cheap to go to, so it’s just trying to alleviate any kind of external barriers that might be present to make sure that my success continues into my competitive career,” said Campbell.

Though Campbell will go to Brazil in May for the Pan American Championships, karate has yet to become an Olympic sport. But it is under consideration for the 2020 games.

Campbell says she is disappointed she doesn’t have the chance to go to the Olympics this year, but she is staying optimistic on the future of the sport.

“I think I’m having a really good year so far so it’s unfortunate, but that’s okay. It’s worth it to wait if it makes it in for 2020.”